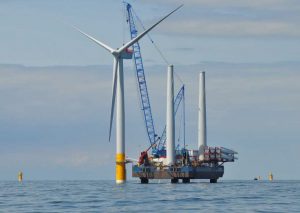 Crew on vessels sailing to offshore installations, for
example, outside the 12 miles zone do not need UK
work permits

A recent case, where a vessel was at risk of detention by Border Force UK, has thrown up some
interesting questions concerning work permits, visas, immigration and manning rules, according to
UK-headquartered marine solicitors Thomas Miller.

When it comes to work permits, crew on vessels sailing to offshore installations, for example, outside the
12 miles zone do not need UK work permits.

It is also true that if you operate a vessel within 12 miles of the UK coast for most of the time then non-EU
crew will need UK work permits. While this could be set to change following the UK’s recent vote to leave
the EU, it is likely to be several years before such changes become set in law.

As with all regulations there are grey areas. In the recent case in question the vessel was travelling from
the UK (east coast) to Ireland and was within 12 miles of the UK coast for most of the time. This was a
voyage undertaken quite frequently by the vessel. It was an international voyage but was carried out
mostly within UK waters. It had distinct features which could have put it in either camp. In this case Border
Force did not take the matter further, probably concluding that this was an international voyage, and the
commercial operations of the vessel were not impeded. However, it did highlight the need to be on the right
side of the law when it comes to these sorts of issues.

Visas are not required for employed seafarers who enter the UK on a ship and who will leave on that ship.
Visas are also not required for seafarers who arrive in the UK by air to join a ship on which they are
employed and which is leaving the UK imminently, bound for an offshore installation for example.
Be wary of mixing manning with immigration. Manning requirements have traditionally been the
responsibility of the Flag State but if your vessel is under 650gt and operates cabotage (intra-national)
services within the EU you might be caught by EU Regulations. The country you operate the cabotage
services in might also impose their own manning rules. For example, they might require a proportion of EU
nationals onboard the ship.

A visit from Border Force can be a surprise as much as it is disruptive to operations and trade. Be open
and honest with the authorities if you do get a call. They will generally try to help if they see you are trying
your best to comply with all the rules.

If in doubt about the regulations then it is always best to seek professional advice. This article is not
intended as a substitute for legal advice and was provided by marine solicitors Thomas Miller who have
offices in Plymouth and Newcastle.